The beisa oryx, also known as the East African oryx, (Oryx besia) has a number of physiological adaptations which allow it to conserve water. Under conditions of extreme heat and low water, the oryx can raise its body temperature to 116 F. Up to this temperature, there is a normal flow of heat from the body to the environment without a loss of water.  Only after this point does it start to perspire.  The Beisa oryx is very much a smaller version of the gemsbok, with very little difference in anatomical features and colorations, and stands just over a meter at the shoulder and weighs around 225-250 pounds. It has a grey coat with a white underside, separated from the grey by a stripe of black, with black stripes where the head attaches to the neck, along the nose, and from the eye to the mouth and on the forehead. The mane is small and chestnut-colored; the ringed horns are thin and straight. They are found on both sexes and typically measure 75–80 cm (30–31 in). Comparably, the gemsbok has an entirely black tail, a black patch at the base of the tail, and more black on the legs (including a patch on the hindlegs) and lower flanks.

Wildlife Systems’ gemsbok hunts are generally set up as a 2-3 day package. We charge a daily fee which includes meals, lodging, and guide. In addition to the daily fee, our hunters pay a kill fee which is a set amount and is not dictated by the size but is simply a flat kill fee. For more details on our exotic game fees, click on this link.

Most of these hunts take place on the historic H. Yturria Ranches, located near Raymondville and McAllen, Texas. These properties are steeped deep in South Texas History. Francisco Yturria was the patriarch of the Yturria Family who was a successful businessman in both South Texas and Mexico. Along with other prominent business people from the mid-1800 era, such as Richard King and Mifflin Kennedy, Yturria amassed tremendous land-holding in the Rio Grande Valley Region of South Texas. Today, descendants of Francisco Yturria continue to operate 3 divisions of H. Yturria Ranches. Our Beisa oryx are found on the La Joya Division which encompasses approximately 6,000 acres collectively. The Beisa oryx herd on this property contains approximately 60-80 animals, with a good percentage of mature males.

The meat from these animals is excellent eating. So, in addition to a great trophy, you’ll also end of with great table-fare. As part of the package, Wildlife Systems will quarter the meat. We have a walk-in cooler, as well as limited freezer space. On the trophies, our guide will fully cape the head and freeze the cape. You can either take the horns and cape back with you, or we can overnight ship the frozen cape, and you’ll be invoiced for the shipping charges along with a nominal service charge for our time on boxing and shipping. We do not ship meat.

For those hunters who are traveling in from out of state, Wildlife Systems can take care of processing your non-resident license. The cost is $48 and is “over the counter”. You’ll simply need to fill out the Hunter Profile that we will send to you and we’ll take care of the rest.

This is a warm part of the world, but it’s best to check the local weather forecast a few days prior to your departure and to pack accordingly. In addition to your regular hunting gear, you might want to bring some sunscreen and bugspray. Regarding size of gun, we recommend a minimum of a 180-grain bullet. Though not as big and strongly built as the gemsbok, Beisa oryx are still plenty difficult to bring down, so we recommend a minimum caliber of a .300 mag. Please stay away from high expandable bullets such as Nosler Ballistic Tips, Berger bullets, and hollow points. We recommend a bullet that will expand but hold its mass, such as a partition, A-frame, or bonded bullet.

The nearest airport is McAllen, if you are hunting the La Joya Division of the Yturria Ranch, which is about 30 minutes away. We can provide CONDITIONAL airport shuttle from McAllen for an additional fee. Most hunters rent a vehicle and drive to the ranch where the guide meets them at the gate. For hunters who are driving from their home, our Wildlife Systems office staff will provide directions, as well as a contact phone number for the guide. 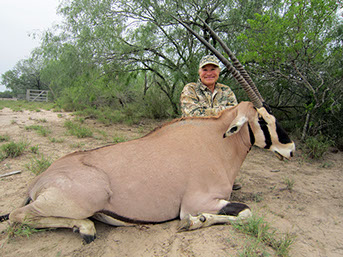