Texas is home to more nilgai antelope than their native country of India. Originally stocked on the King Ranch in the 1930’s, these sporty game animals quickly took hold and are currently on a handful of large private properties in lower South Texas. The majority of Texas’ nilgai antelope are found on no more than about 10 large private ranches, with Wildlife Systems having access to three properties in the heart of the best nilgai hunting in the world. When is comes to nilgai antelope hunting, these hunts offered by Wildlife Systems is as good as it gets and our proven track record dates back to when our company was started in 1987.

Nilgai antelope are the second largest member of the antelope family, with the older bulls often being referred to as “blue bulls”, as the dominant males typically become very dark, taking on a blackish and blueish hue. These are large, sturdy animals with mature bulls weighing upwards of 600-700 pounds on the hoof. Trophy size nilgai antelope bulls will normally sport vertically oriented horns measuring 8.5” - 10” in length. They feature a unique tubular shaped beard on the midsection of their throat. Nilgai antelope can present a challenging and fun hunting experience, as they very skittish, and their keen eyesight is atop an elongated neck, making it difficult to approach them without being spotted. They are horribly difficult to bring down, and rarely do they get dropped in their tracks unless taken with a spine shot. We have a minimum caliber restriction of a .300 mag.

The two camps at these H. Yturria Divisions are unique and comfortable. Each camp is built with an African safari type of facade, with both camps having several chalets, each chalet having two beds and private bath facility, all of which are air conditioned. Each camp also features a central building for dining and lounging, and a fire ring provides a perfect evening venue for relaxing with a cool drink and enjoying the endless supply of stars. Both camps are carved out of the South Texas brush, well off the beaten path so that you can be immersed in tranquility.

The other property that we offer nilgai hunts is the El Sauz Division of the East Ranches, located on the edge of the tiny fishing village of Port Mansfield. This property is also steeped in South Texas history, comprising over 28,000 acres. With several miles of coastline along the Laguna Madre, this property is rich with native wildlife. Nilgai are the only animals that are commercially hunted on this property and there are is a large population of these amazing animals on this place. Hunts are conducted from a large private facility that is located 1 mile from the ranch gate. The lodge is exceptionally well-appointed with high end amenities and plenty of room for everyone to have a relaxing and comfortable experience while they are back at the lodge. Depending upon the group size, sleeping arrangements are either single occupancy or double.   It is common to see 20 - 30 nilgai bulls per day. It is a matter of finding the right bull and making a successful stalk. These nilgai hunts are as good as any that are on the market today.

What is Furnished on Our Nilgai Hunts?

Our nilgai antelope hunts are set up as 2.5 day packages including 3 nights lodging. Some hunters are guided 1x1 and some clients are 2x1 on the Yturria Ranches, while all hunts at the East Ranch are based on a 2x1 format. Three meals daily are served. For a $100 per trip charge, we will furnish you with airport shuttle to and from Harlingen, which is only a 50-minute drive. Your harvested bull will be skinned, caped, and the meat will be quartered as part of the package and you may choose to pay to have the meat commercially processed at a nearby facility. Nilgai that are being processed at the commercial processor may need to be shipped by the processor to the hunter, as the processing may not be finished by the time that our clients head home. All arrangements with the meat processor, including payments and shipping, is between the client and the processor. Wildlife Systems does NOT ship meat, but we can ship your cape and horns if necessary. Should we ship cape/horns, there will be a nominal service charge on top of the shipping charges. Since the capes are large and heavy, overnight shipping charges of the cape may be as much as $350+ for a shoulder mount cape. Incidentally, nilgai meat is excellent eating, which makes these hunts even more attractive.

We can accommodate as many as 8 hunters on the East Ranch on a given hunt, and as many as 6 hunters at certain times from the Yturria camps, but we can also accommodate singles and small groups on either property. These hunts are popular corporate type hunts and are equally as appealing to single hunters and small groups of friends. We do operate under a restricted quota, so booking well in advance is recommended.

Due to the size and hardiness of nilgai bulls, this property has a minimum caliber allowance of a .300 mag. Well-constructed bullets such as partitions, A-Frames, and bonded bullets are recommended. No highly expandable bullets, such as Nosler Ballistic Tips, hollow points, or Berger bullets are allowed. Your guide is required to carry a back-up gun in case a follow up shot is necessary to prevent a wounded nilgai bull making it into the Texas brush. We recommend that your gun be sighted in dead-on at 100 yards.

This  region features a warm climate, and rarely is cold weather a factor. For hunts that take place in September, October, March, or April, you can generally get by with light weight clothing. Hunts during the November – February period may encounter a bit colder temperatures, but it’s often mild this time of the year, as well. Clothing should either be camo or drab colors, as nilgai have super eye-sight and are extremely wary animals.

Resident hunters simply need their regular hunting license; no special permits are required. Non-residents will need a Special 5-day Non-Resident Hunting License which is only $48 and is over the counter, thus requiring no drawing or special lottery. Wildlife Systems can take care of printing the license for our clients, if the client will simply fill out our Hunter Profile and indicate their need for us to take care of their license.

Nilgai are extremely difficult to bring down. Our clients should know that all wounded animals will be treated as a kill. It will be the guide’s decision to determine if the animal is hit/wounded. It’s not uncommon for nilgai to be hit and not leave any blood, due to the thick skin. Thus, if the guide deems that the bull is hit, even with no blood, then the animal will be treated as a wounded animal and will be counted as the allotted harvest. This is one of the reasons why Wildlife Systems is mindful with our caliber and bullet recommendations to our clients on these hunts.

For pricing on these and other hunts, click on this link. 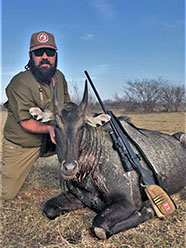 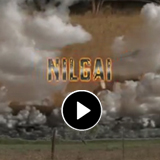 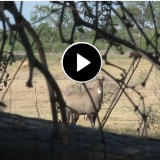